Did You Know: King of Hearts doesn’t have a Moustache!

The deck of 52 cards are known to everyone irrespective of whether they have used the cards to play or not. We can play many card games using these 52 cards like solitaire, freecell, rummy, flash card game, etc. But, have you ever observed the cards in details? Well, if you haven’t yet, do check all the 4 cards of Kings. The King of Hearts don’t have a moustache! And also one more unusual thing, what is it?

Whether you knew this or not, you must have surely started wondering ‘why?’. Of course there is only one reason why this one king is different than the other 3. But there are also some myths, some false stories prevalent among the masses, let’s have a look at them:

Another story says that, it is considered as a disguise and represents cunning to have a moustache by anybody. Hence, the kings of spades, diamonds, and clubs are associated with war, wealth, and death and are viewed as corrupt. On the other hand, the king of hearts is viewed as a clean, pure, and open, who does not have any artificiality. Hence, he is depicted as clean-shaven.

A large-scale manufacturing of these playing cards was done by printing them only on woodblocks in the 16th century. During the reproduction of cards throughout the centuries, many disfiguring in the design and shapes of the cards occurred because the ‘incompetent’ blockmakers distorted the true and real design of the cards. Thus, originally it is said that the King of hearts had a moustache before, but because of the gradual distortion by the blockmakers and wear-n-tear on the blocks, he lost his moustache.

Another thing to notice on the king of hearts, is the sword which looks like he (weirdly) is putting it in the back of his head and attempting to kill himself. The reason of distortion comes into play here too. Originally, he was holding an ‘axe’, that too in the vertical position. But, gradually it turned into a horizontal sword. If we look around us, every small change, difference, or weirdness has a meaning behind it. The deck of 52 cards have been in existence since centuries, and hence, have accumulated many such fascinating stories or facts about them. Do you know any other such reason why a card is different? Do tell us in the comments below. 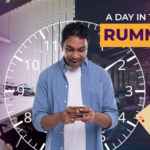 Previous Post A Day in the Life of A Rummy Pro 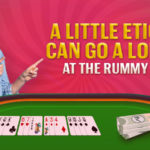 Next Post A Little Etiquette Can Go a Long Way at the Rummy Tables!