Practice or Cash – Which type of Rummy player are You

Card games have been played since centuries, esp. the game of rummy is an important one for lakhs of Indians. With the advent of online rummy gaming, many more Indians are starting to play it. The main reason is the chance to win lucrative and real cash. Today, you will find thousands of rummy players who have gone professional and are winning matches, as well as lots of cash. They have made rummy gaming as their secondary income.

Hence, today’s rummy players can broadly be classified into two categories – Practice players or Cash players. In which of these do you fit? Let’s understand the characteristics of these two:

A player who predominantly plays practice games, is mostly someone who has just started playing rummy. Such players consider rummy as a recreational & fun game, and hence aren’t enticed by the ‘real cash winning’ aspect of it. They make mistakes while playing, they play really safe even though winning or losing doesn’t matter to them.

Even though rummy is a game of skills, unpredictability, and a lot of anxious moments go on in the game, these players play rummy just like any other small casual game. They will not set aside special time to play it every day, but only when they feel so or have time.

Some practice players of today, would be the ones wishing to become professional in the future and go full throttle with next level, i.e. cash games when they are ready. They are currently on this level because they want to get a grip on the game, rules, strategies, tricks, etc. it is safe to experiment with new strategies and tricks, lose games, make mistakes, learn from them, and develop their rummy skills.

A player who plays cash games regularly, is on the next level of rummy gaming than practice games, although, even he/she may go back to playing a few practice games for various reasons. A cash rummy player is someone who is experienced and/or talented at playing rummy, he/she has played a lot of rummy including offline or online.

Such players believe in and do take risks, whether it is just a card move or playing high-stakes games with strong opponents in which lots of money are up for grabs. The word ‘mistake’ does not exist in their dictionary, and hence, they really don’t like to lose. They are well versed with all the rummy strategies (have made their own too!), and also know all the tips & tricks. They are usually “VIP” category players of the rummy platform.

These players play rummy every day without fail, they regularly deposit money, take advantage of all the offers, take part in all special tournaments and promotions by the rummy platform(s). They also win huge cash money and other prize on a regular basis, and till date, have won a lot of matches & real money by playing rummy. They are quite serious with their rummy gaming career.

So, where do you stand in rummy after knowing the details of these two categories? If you are a practice or casual player, will you be leveling up and become a cash player? The important thing is to stay dedicated at playing rummy, be in control of your finances and time, do not spend more money and time than needed on online gaming, because it is a stress-busting activity meant for fun, not vice-versa.

Previous Post 5 Points to take care of while playing Rummy 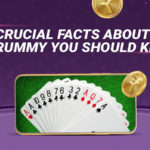 Next Post 7 Crucial Facts About Rummy You Should Know