Defensive or Offensive: What Works better in Rummy?

If you think that Rummy is a game of chance, then you are mistaken. Rummy is purely a game of skills, just like other skill games, players of rummy do employ different strategies, playing styles, tricks and moves to win the match. Due to all of this, rummy is truly a highly entertaining and fast-paced game that generates an adrenaline rush for the players.

But whether a player is a newbie or an experienced expert, what style of play do they usually employ and which is the best? Most of the rummy players play either in Defensive style of play or the Offensive one. Many of these players also employ a mixture of these two styles or play them intermittently in a game. Let’s find out which one is better!

If you play with this style, then you will follow your opponent’s lead and let them set the pace of the game. Accordingly, you will plan and make you moves, as by adapting to your opponent’s style, you will be able to play counter moves and nullify their moves. Although this is a passive approach, it is a last resort for players when they have run out of other strategies to win the game. This approach will also lead your opponent to misjudge your moves.

Usually defensive pace is employed by players who are submissive by nature. It also works best when you have bad cards in hand, i.e. cards with which it will be difficult to make valid sets/sequences and do a correct show before the opponent. It is usually suggested that you go for the following approach before you even think about the defensive one.

In this style of play, you will do exactly opposite than following your opponent, you will be proactive, aggressive and attack your opponent with your moves and different strategies with a sole purpose – to win the game. This style requires a lot of practice as you should also get/have a thorough knowledge of all rummy strategies, moves, and rules.

You need to have amazing time management and observation skills, decision making, and memory power to ace the game. Just ensure that you are not using the same tricks and moves over and over again, as your opponent will read them and counter-attack with their own moves to nullify yours. Always innovate with different strategies and tricks, you can also invent yours and keep your opponent guessing.

Which one to go for?

By now, you must have got acquainted with both: the defensive and offensive style of play. But when it comes to using these styles, there is no clear winner. There isn’t a single style of play or strategy that will guarantee a result for you because rummy is an unpredictable game, few moves are enough to completely change the possibility of result.

What you may do is, learn and practice both styles of play esp. in the practice games. Learn all the strategies, tricks, moves, and counter moves as much as you can. Beginners may start with the offensive approach and use the defensive one only if they come up against an expert player. You can also use a combination of these styles, you can play one style for a few moves and other one for another few moves, and confuse your opponent! Never make hasty decisions, always ensure that you know all rules, and the whole situation of the game (including your opponent’s cards & moves) before deciding your approach and your next move. Keep playing and practicing Rummy! 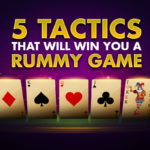 Previous Post 5 Tactics that will Win you a Rummy Game 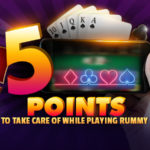 Next Post 5 Points to take care of while playing Rummy