5 Tactics that will Win you a Rummy Game

There is no shortcut to success, whether it is in career, life, or in a rummy game. You have to work hard, acquire the relevant skills, and keep working to go ahead. You also have to have tactics, esp. while playing rummy, that will greatly help you win a rummy game. Many top rummy players use a lot of tactics in varying effect to defeat their opponents and win a lot of cash!

Rummy is not a game of chance, it is a game of pure skills, and players regularly use tips, tricks, strategies, and tactics to win real cash. Here are some of the tactics you can use to greatly increase your chances of winning in rummy:

First thing first, in the beginning when you get your cards, you have to make a correct decision before starting the first draw of cards. If the cards you have got, are difficult to form sequences and sets, then it is not always that you should do a drop and lose only 20 points, but also check, if you can really turn the situation in a few moves. Only then you decide to play or drop.

Calculations in every move

Unless if the high-value cards cannot be slotted into sequences, you should try to discard them first. Always keep the value of points of your cards in your mind, and try to keep them at a minimum. You never know when your opponent will do a show. Know the points value before you make a move, decide to discard a card, see the card on the open deck, or decide to take a card from the closed deck, when your opponent discard their card. At every step, estimate the points value you may have.

Different players have different styles of playing rummy. Some are slow, some are aggressive, some like to confuse the opponent, etc. even you might have developed a playing style knowingly or unknowingly. It is not always advisable to keep playing with only one style of your choice. In the first few minutes only you should guess the playing style of your opponent and then modify yours accordingly to counter him/her and get the win.

Rummy is not just about playing your own game, making your own sets and sequences to win, but also about knowing what your opponent is up to. You never know when, suddenly will they do a correct show and win the match, all the while you were busy making your first pure sequence. You have to do a correct show BEFORE your opponent does. Hence, always keep a watch on all their moves, estimate what cards might they have, and when will they meld all their cards.

Having said the above point, don’t rest on ‘only knowing’ about your opponents’ moves and cards. Besides ensuring you meld all your cards as early as possible, you also have to see that your opponent doesn’t do it before you! Hence, you have to confuse them with card discards and picking ups that will make them think something else of your cards than the reality, and make moves as you want.

It is correctly said that ‘Practice makes a man perfect’, this applies also for all rummy players. You can start using tactics from the above, learn and practice more such tactics, tricks, etc. or develop your own to defeat your opponents and win big cash while playing rummy. 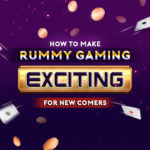 Next Post Defensive or Offensive: What Works better in Rummy?