A Walk Through the History of Rummy Games

Today you can play online rummy at almost every gaming platform. But do you know the source from where this card game originated? The history or rummy suggests the existence of the game thousands of years ago. In the post below, we will discuss different perspectives about how the game came to see the light of the day.

What is ‘Conquian’ and does it have links to rummy? Find it out here:

The Basis of the Name – Rummy

Why is rummy called rummy? Here is what you must know:

Did the game come from Asia? Go, read more below:

Connections with World War I and Poker

Was it a fallout of World War 1 or the Poker variant? Know here:

It is hard to pinpoint a single source to the origin of rummy games. By all the propositions, it is possible that somehow the game was played by travellers and royalties who went from place to place. This is how the game became popular in different parts of the world. And every country developed its version of the game. Rummy also became a household game during Great Depression and the 1930s. This is because people chose simple and inexpensive ways to stay entertained with their dear ones. 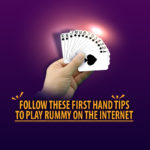